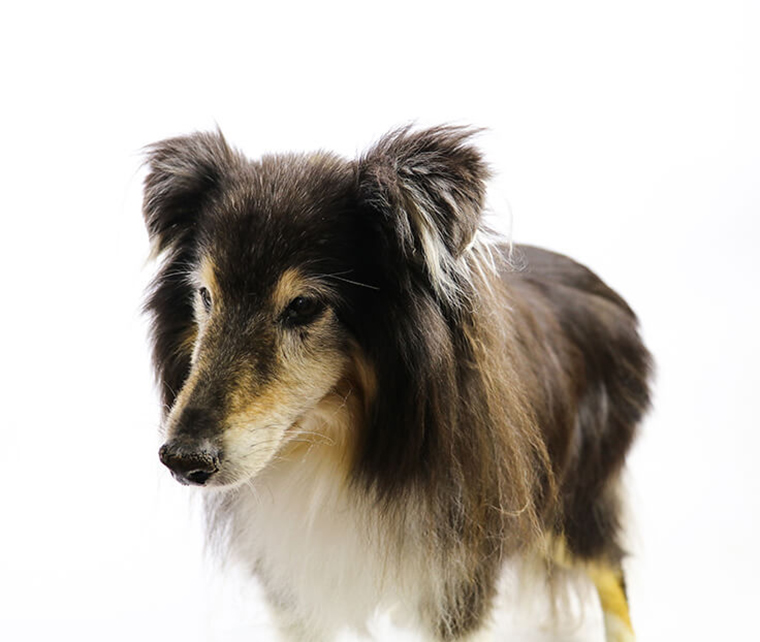 ‘Kura’, our Pet Hero #6, is the gentlest of Sheltie dogs. He was already over twelve years old when he came to us well over a year ago presenting with what appeared to be an ageing heart. He had had a heart murmur for many years and recently it had become a little worse. He was slowing up and coughing a little and had lost a little of the zest that he had had previously. He was provided with routine therapy to help control a weak and elderly heart, and it was hoped and expected that an improvement would occur.

He was brought back to the surgery a couple of weeks later no better; in-fact his appetite had reduced, and he was losing weight and condition. His loving owner wanted us to run diagnostic tests, and this is where ‘Kura’s’ journey started. An ECG showed conduction irregularities. Far worse was that blood tests revealed that he was going into kidney failure and worse still an echocardiogram (an ultrasound scan of the heart) revealed the deep-seated cause of his problem was pericarditis. Pericarditis is where fluid develops inside the fibrous sac, the pericardium, which surrounds and protects the heart. There can be many reasons for this to occur and most cases have a very poor prognosis. The echocardiogram showed no heart tumour but did indicate that heart failure was developing.

The priority was to stabilise his kidneys which required intravenous drips and medication. He needed an anaesthetic, and we had to get him well enough to survive a drain being placed through the pericardium and into the space beside the heart. Vet, David Jeffery, successfully placed the indwelling pericardial catheter into place immediately removing the deleterious pressure on the heart. This procedure has risks in itself as the needle of the catheter is working within millimetres of the heart itself. New drugs were added to improve and strengthen cardiac output and ‘Kura’ suddenly improved, and a couple of days later the catheter was removed.

To our delight he improved; kidney function was better, and he started eating, and then disaster struck just as we appeared to be winning, with a relapse of the pericarditis. We were able this time to place the pericardial catheter under sedation and a local anaesthetic and this time he got better.

‘Kura’ was weak for many months and his kidney function was very poor, he has had a picky appetite and struggled to maintain his weight. Well over a year has elapsed and his caring owner makes sure that he gets his medication, he enjoys his walks and all of the attention he gets.

‘Kura’ is a true survivor, a real ‘Pet-Hero’, who has battled against all of the odds over many months to have recovered and appears to be thoroughly enjoying his fourteenth year. Age will catch up one day but hopefully not for a long time.