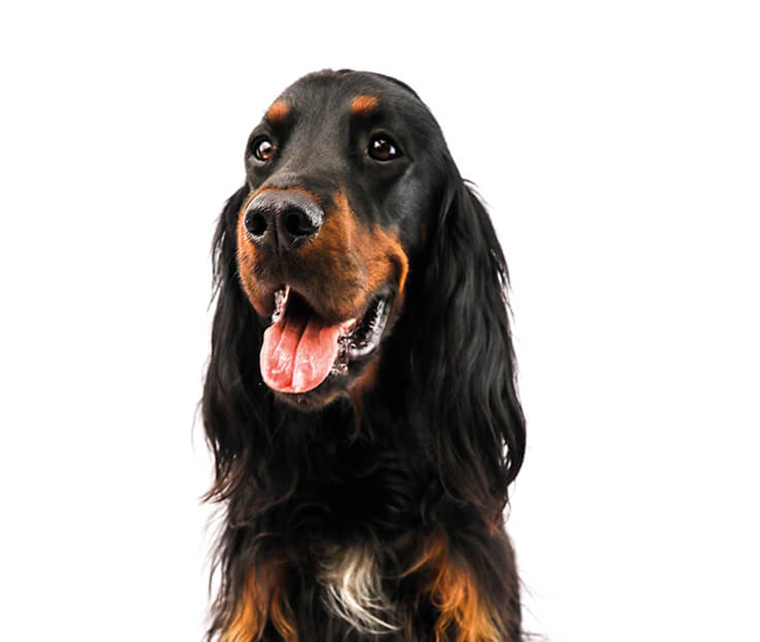 On a dark Winter’s evening in February, Connie, a young and inquisitive Gordon Setter escaped from her garden.  As with most animals, she saw no danger in running free on the main road.  In the dark, the driver of an oncoming vehicle had no idea that Connie was loose on the road and she was hit.  The GSPCA on-call staff were called to the scene and immediately informed Isabelle Vets as they arranged transport in their animal ambulance.

The on-call vet, Sarah-Jane Heathcote, along with veterinary nurse Jay Ray were awaiting Connie’s arrival following the call from the GSPCA to warn them of the dog’s condition.  Connie arrived laying on her side, bewildered and quiet. Her owner was with Connie while Sarah-Jane carried out an initial examination.

Road traffic accidents frequently happen in Guernsey, more so with cats than dogs, and therefore the vets have exposure to all sorts of scenarios. Connie was conscious, appearing to recognise her owner, but made little attempt to move.  Her rapid pulse, breathing and pale membranes demonstrated the cardinal signs of shock.  Her chest sounds were abnormal, and her breathing laboured.  There was no sign of external injury, but given the fact she had been hit on the main road, the assumption was that the impact was at speed and therefore internal injuries were a real concern.

Intravenous catheters were placed to support Connie’s circulation with fluid therapy and to provide venous access to administer strong pain-relieving drugs and anti-inflammatories.  She was moved to x-ray, to have survey radiographs of her spine, chest and pelvis.  Incredibly she had no broken bones, but the first indication of internal injury was that of a pneumothorax ( air in the chest between the lung and the chest wall), easily identified on x-ray. In this case, the impact had damaged the lung, breaking the airtight seal in the chest cavity.  Air was drained from both sides of the chest to ease Connie’s irregular breathing.  It was touch and go as to whether Connie would survive this initial trauma, but worse was to come. A few hours after admittance, Connie’s heart rate increased further and her pulse became very weak and thready.  Her abdomen (tummy) started to feel as if there was fluid present. An ultrasound scan confirmed free fluid in the abdomen and a sample drawn from the abdomen demonstrated blood.  Connie’s condition was critical. There was evidence that she was bleeding internally now.  Every effort was made to stabilise her, to ensure she would survive the surgery to investigate the source of the internal bleed,  A blood donor was put on standby, and as soon as the emergency treatment had stabilised Connie, she went into theatre.

A ruptured spleen was the cause of the bleed, and fortunately, animals can survive without their spleen so therefore it was removed.  On the surface of it, all the other organs looked normal.  Connie had survived the first 24 hours and made a steady recovery, enough to eventually go home and recuperate. Her appetite was still not normal, and at her post-op check, a blood sample was taken to assess her liver and kidneys.  Evidence of further trauma to the liver showed on the blood sample.  Luckily, the liver can repair itself, given time and a supportive diet, which Connie is currently receiving.

Connie survived a horrific accident and major surgery.  Through it all she has been incredibly brave, never once objecting to any of her tests or treatments and we believe deserves to be our Pet Hero of the month.  Thanks also need to go to the GSPCA for transporting her so quickly to the surgery and to the owner of the car that hit her who stopped and was able to describe how the accident happened.